CapitalVia supporting the Digital India campaign launched by the Government of India by making the country digitally improved in the field of technology, CapitalVia is taking a step in upgrading the Investment Advisory Space by introducing its customer portal “CapitalVia” App. It is designed to enable seamless customer experience by providing real time advice & solving grievance through mobile application.

Talking about the application Mr. Gaurav Garg, Head of research, CapitalVia added that, The application will largely help the Tier 2 & Tier 3 cities to upgrade themselves on the right investment options and stock market by providing knowledge center and consumption of recommendations through one click. The digital portal will act as normalizing the digital investments in the state and build trust amongst the investors.

Choosing Gujarat for the Launch of the CapitalVia App for the EquityMarket:

1. 18% Demat: Second highest contribution towards total Demat accounts (after Maharashtra which is 22%)

3. Per Capita Income: 55% higher than India’s per capita

4. Richest State: Gujarat has achieved the distinction of being one of the most industrially developed states. It accounts for 5% of the total Indian population and contributes about a quarter of India’s goods export.

The Upcoming Union Budget 2021 will act as a cherry on the cake in driving the market sentiments and spread the investments across equity and debt fund categories. The investors &traders should expect the below from the market in 2021 ahead of Budget announcement.

Budget expectations and its impact on market

CapitalVia the present scenario calls for a budget that is inclusive, stimulating and growth oriented. The prolonged lockdown in 2020 has taken toll on GDP and plunged the economy into technical recession.

The street seems to be gauging the upcoming budget in line with the stimulus packages announced in the last calendar year. One can expect a fair amount of aid and relief to the priority and core sector, along with it. Banking sector must also be taken care of as the effect of moratorium will be evident in the upcoming days, NPAs may prove to be a problem again and therefore this issue must also be considered.

Budget has always had an impact on the markets either long term or short term, but the upcoming Budget will be a crucial one with the humongous hopes of the investors and common people alike. If the Budget is not as perceived, then the market may correct itself significantly.

The Indian benchmark indices have put up a stellar performance last year. Out of eleven months, Indian markets received net foreign inflows in seven months the previous year. Nifty generated more than 14 percent return. Indian market valuations seem expensive as of now. Therefore, there are possibilities for the benchmark to consolidate. We’re expecting a double-digit rally in Nifty by the end of 2021 on the back of increased retail participation, favourable policies by the government, demand resumption and fresh foreign inflows. However, the pace of growth might not be same as 2020. Intermittent corrections cannot be ruled out as there is a risk of the new virus strain and thus sustenance of economic recovery holds the key.

The bond prices raised in the year 2020 as RBI has cut the interest rates. So, debt mutual fund investments across the spectrum benefited. Long-dated bonds like gilt, long duration and dynamic bond funds double digit returns. The expectations should not be the same for the CY2021. Interest rate cycle has seemed to bottomed out and scope for further rate cuts is less because of rising inflation and higher government borrowing. Therefore, investors can gradually book profits from mutual funds holdings and long-dated bonds like gilt and long duration funds. Though interest rates may not fall further, they are not expected to rise any time soon either. Investors may look at corporate FDs and secondary market bonds for chasing slightly higher returns after considering the credit risk involved.

India is a developing economy, and this is the fact that commodity exchanges are themost organized setups for the price discovery of the many agriculture commodities. Inabsence of commodity exchanges, there may be a gap between buyer’s and seller’sexpectations. Also, India has the potential to lead the world in determining the fairmarket price for many commodities like Jeera (Unja), Soybean (Indore), Rubber (SouthIndia) etc.

There has been a lot of steps which had been taken to increase the participation ofinvestors in the commodity market. FPI had been allowed in Commodity market since2014 and Mutual funds were also allowed to launch dedicated commodity funds in2017. Lately, exchanges have also come with new products like options and indices.

Despite of these measures, participation in commodity market is low as compared to theequity market. In fact, we have seen a fall in trade volume in the commodity exchangeswhen the trade volumes have increased significantly in equity market.To improve on this, the government might announce certain relaxation to theexisting Commodity Transaction Tax (CTT) structure.To trade 1 lot of Copper (Contract value of around 15 lakhs, margin required is around71,000), CTT would be around 150 Rs and total taxes would be around 320 Rs which ishighest in comparison to overseas exchanges.

This can be one of the reasons why traders are not involved in formal tradingecosystem. Any relaxation on this, would bring cheer to commodity traders and we canexpect the shortfall of tax to be recovered through increased participation and volume.

Import duty is very high on gold as compared to other industries and commodities. Theindustry is expecting the same to be placed at 7% so that formal and organized playersare rewarded, and it can lead to a level playing field for them. 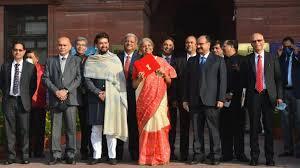