It has been encouraging for our motorcycle business at Royal Enfield as we have seen increased revival in consumer sentiment and demand. We have a robust order book and booking numbers are ahead of pre-covid levels.

We are working to ensure sustainable volumes in the forthcoming quarters. We are very excited to have launched the Royal Enfield Meteor 350 earlier this month.

The Meteor 350 takes our cruising legacy to the next level from the Thunderbird, and is a gorgeous, accessible and easy cruiser. Initial response from consumers as well as from automobile experts has been very good. We are confident that the Meteor 350 will redefine the highway cruising space in India and globally.

In the commercial vehicles industry, the sentiments are improving with a gradual pick-up in the demand from certain sectors. At VECV, we continue to remain focused on our long term objectives, including driving modernization in commercial vehicles.

Speaking on Royal Enfield’s performance, Vinod K. Dasari, CEO, Royal Enfield said, “At Royal Enfield, consumer demand and our order books have been growing consistently since June this year, and we are happy to report that we are ahead of pre-covid levels of bookings. We have been working consistently towards enhancing and improving the purchase and ownership experience of customers.

We recently launched the Royal Enfield Meteor 350 along with Make It Yours – a first-of-its-kind initiative in the two-wheeler industry which allows buyers to personalise, accessorise and configure a motorcycle at booking stage itself. MiY is now available on the Meteor 350 as well as on the 650 Twin motorcycles.

We are very proud to be the first Indian motorcycle manufacturer to offer such a wide choice of personalization options to consumers. Innovative initiatives such as Service on Wheels and Home test rides have received encouraging response from customers.

We have also expanded our network during the quarter, by adding 25 new stores and 133 studio stores across India, and 6 new exclusive stores in International markets.”

Royal Enfield launched the all- new easy Cruiser Meteor 350 in the first week of November 2020. The Meteor 350 is a supremely refined, easy and accessible cruiser.

It is an all-new motorcycle, with a ground up engine and chassis that makes it absolutely smooth, refined, very accessible to ride on the open highways and even within the city – it is truly an easy cruiser.

The Meteor is inspired by our cruising and long distance riding legacy and building cruisers such as the Citybike, the Lightning and the Thunderbird – India’s No.1 highway cruiser for more than two decades.

The Meteor 350 takes all that learning and capability and pushes it several notches to bring a fabulous new motorcycle which we believe will redefine cruising in India and globally.

Make It Yours allows a customer to personalise his or her motorcycle with thousands of possible combinations via the Royal Enfield App, on the website or at a dealership. Tripper is a highly focused navigation display device for real time directions, built with Google Maps Platform.

In keeping with the International expansion, Royal Enfield commenced local assembly of motorcycles in Argentina in partnership with Grupo Simpa, Royal Enfield’s local distributor in the country since 2018.

This is the first time in Royal Enfield’s modern history that motorcycles will be assembled and produced outside the company’s manufacturing facilities in Chennai, India.

Royal Enfield has always had a longstanding commitment of providing a ‘pure motorcycling’ experience to everyone in love with the motorcycling way of life and also taking it beyond the legendary motorcycles.

To engage with the community, the brand rolled out its first-ever design platform – Art of Motorcycling. Through this platform, Royal Enfield fuelled creativity and engaged with artists, creators, and motorcycling enthusiasts and brought forward their love for motorcycling. This saw over 10,000 registrations from all over the country.

On the apparel front, Royal Enfield launched a limited-edition capsule collection in collaboration with Levi’s. With a rich legacy and the cultural impact that both the brands have, the collaboration is a perfect fit for both riders and non-riders.

In Spite of drop in revenues, the EBITDA margin improved to 6.9% for the quarter against 5.4% during corresponding quarter for the last year due to stringent cost reduction measures being undertaken. We incurred a marginal loss of Rs 7 crores during this quarter against a profit of Rs 15 Crores in Q2 last year.

Speaking on VECV’s performance Vinod Aggarwal, MD and CEO VECV said “The Commercial vehicles industry (3.5T GVW and above) continued to decline in Q2 despite quarter on quarter improvement. As against Q1 decline of 91%, decline in Q2 was much less at 46% against corresponding quarters of previous year. Within the overall industry, the worst impacted is the Bus segment with decline of 85% in Q2 and 97% in Q1 due to negligible demand from school and staffing segments and adverse impact on inter-city movement through public buses due to COVID.  We sold 8167 vehicles in Q2  and 10296 vehicles in the first half as against 11370 vehicles  in Q2 and 24701 vehicles in the first half of last year.

The last quarter witnessed quite a few exciting developments. It was a proud moment for VECV when it became the first company in the industry to launch 100% connected vehicles with an advanced telematics solution. This will result in significant improvement in productivity for the customers.

The state of the art Bhopal truck plant became operational last month with declaration of commercial production. Another notable development was integration of Volvo Bus India into VECV.

Along with a strong product line with Eicher brand, the addition of the iconic Volvo brand will give us an edge in technology with access to Volvo Group’s world class technology for Buses.”

Fri Nov 13 , 2020
Spread the loveRMSI Cropalytics earns recognition at NASSCOM Emerge 50 Award 2020 Agri-tech start-up RMSI Cropalytics has been recognized by NASSCOM as one of the […] 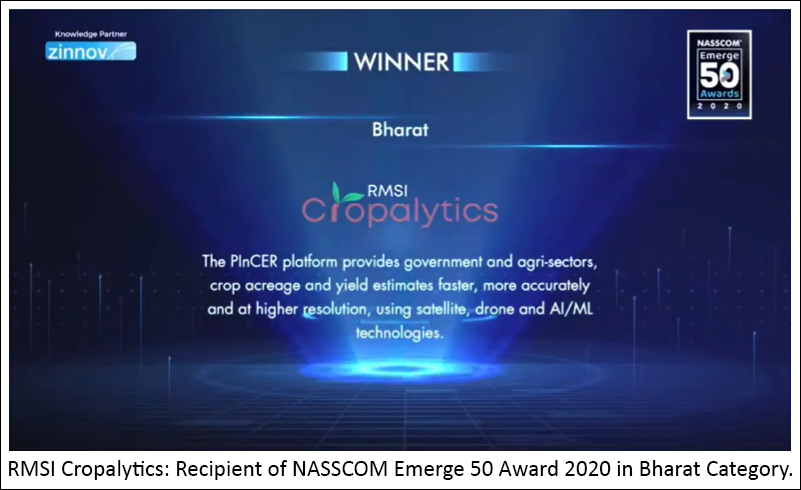