Unveiling the new solar power policy, Chief Minister Vijay Rupani said Gujarat has taken various proactive measure and made rapid strides to take the development of Renewable Energy in the state to a new height. This has resulted into overall growth of renewable energy sector and made Gujarat a leader in the country.

In order to increase the growth of solar energy sector in the state and to provide affordable electricity to the people, State Government had implemented Solar Policy in year 2015. Considering the overwhelming response to this policy, the Government of Gujarat is now going to implement the new “Gujarat Solar Power Policy 2021” to ensure clean, environmentally friendly and sustainable energy in the state.

Spelling out more details about the policy, chief minister said:

Energy Minister, Saurabh Patel said that this new policy which is being implemented by Gujarat Government will boost the development of pollution-free renewable energy and help accelerate the sector. He added that this policy will take Gujarat forward in becoming energy hub. If we look at country’s history, Gujarat has provided an excellent opportunity to connect people in the field of energy. This policy will enable anyone be it residential consumers, farmers, commercial consumers, small and medium industrial houses, religious & educational institutes, that wants to generate electricity and sell it after own their own consumption.

Giving details about the work done by Gujarat in the field of green energy, Chief Minister said that Gujarat has already achieved 11,000 MW of production capacity and now has set a target of producing 30,000 MW of green energy by year 2022, which will largely include wind and solar energy. Moreover, Gujarat has successfully implemented solar rooftop scheme and is currently generating around 800 MW of solar energy from it. Also Gujarat has been ranked first in the country for largest solar rooftop installations.

Tue Dec 29 , 2020
Spread the lovePrime Minister Narendra Modi will lay the Foundation Stone of AIIMS at Rajkot, Gujarat on 31st December 2020 at 11 AM via video […] 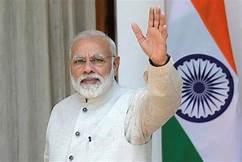